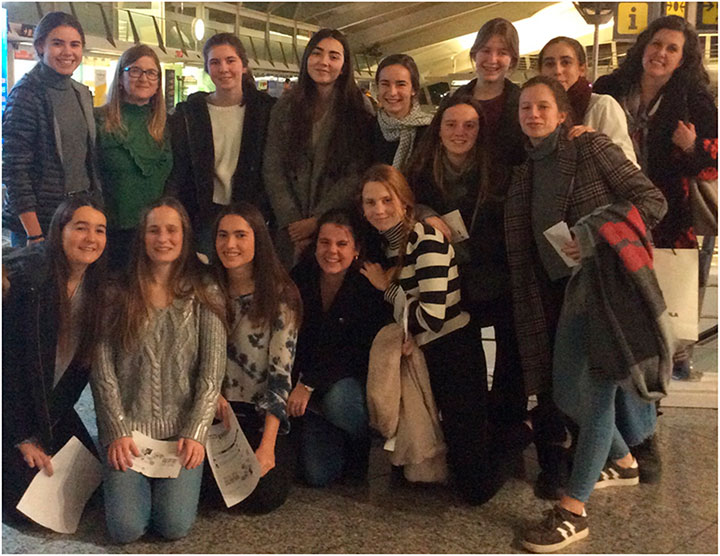 This year, 13 students from 4 ESO have travelled to Norwich, England for five days to attend the NORMAC conference, accompanied by the MUN Director Nicola Dignum and Beth Boyle. The students were in four delegations of three representing Canada, Sweden, the Russian Federation and the Gwich’in Council, and one student was responsible for social media.

The day had finally arrived. It was wednesday, and we were meeting at 19:30 at the airport. Once we were all there our parents took a picture of us, the first of many! We passed through security, surprisingly very fast, and we got on the plane. We took off at 21:25 and landed at 21:50 (british time), it was an amazing flight! Once we got off the plane we passed through passport control, and outside was Josh, our driver, waiting for us with a minibus. It took around 45 minutes to get to Cambridge, but during that time all of us were sleeping, and when we arrived at the YHA it was already past midnight.

The next morning we woke up, got ready and went to have breakfast, which was delicious! We had a great first night!

On Thursday morning we went on tour in Cambridge. When we arrive at the place, we met Sandy, our tour guide, who was waiting for us. During the tour we were surprised because a lot of people were riding bicycles and all the houses where low with black ceilings. The guide explained us that Cambridge was founded by the romans almost 3 thousand years ago. The first thing we saw was the first laboratory built in Cambridge. After that we went to Pembroke college, founded by Marie of Anjou. An interesting fact is that you can’t step in the college grass unless you are a senior teacher or if the teacher invite you! Cambridge bridge was the next place we visited. A popular fable about it is that Isaac Newton, who used to be a Cambridge student, designed and built the bridge. The students disassemble it and when they were putting it back together they were obliged to resort to add nuts and bolts. The last place we visited was the King’s college and the Senate, where some engineer students placed a car in the roof as if it had fallen from the sky in the middle of the night! The police and fireman couldn’t get it down and within a week after disassembling it, they got the car down. The place that I liked the most was the Eagle bar, where Crick and Watson announced that they had found “the secret of life”, the DNA.

After the Cambridge tour, we has free time to spend on lunch and shopping. Some of us went to some shops to buy souvenirs for our families and we entered to a near italian restaurant where we ate some delicious and enormous pizzas. Then we went to the YHA to take the luggages and right after we went into the bus to travel to Norwich. We arrived at the hotel, we changed and we went to the Norwich school to the opening ceremony.

On thursday afternoon, around 7pm, we had the opening ceremony. At first we met the other students in the Great Hospital and then the Arctic Council director started the ceremony with a wonderful speech about the council. After that we commenced with the minister speeches. Canada was the first one giving the speech and she did great! Her speech lead to other fantástic speeches such as the Russian and the Gwich’n ones. Later the director of the Great Hospital told us the history behind the building. At the end Dr. Speca answer all the doubts that we had about the conference and invited us to the dining room, where we had a delicious dinner with our new friends. When we finished dinner, we went back to the hotel to have a nice sleep so that we could do our best the following day.

On Thursday night we had dinner at Norwich school. We had grilled chicken followed by a delicious lemon tart. We sat with some English students from different local schools. They were all really nice and made sure that we had a really warm welcome. We had time to chat and got to know to know each other better and we also shared our opinions in relation to the conference’s topics. Just before the end of the night Dr. Speca made a closing speech and everyone started heading home and in our case to the hotel.

On Friday morning, we went to the Anteros Art Foundation to start working on our working groups. In the music room the delegates from the Sustainable Development Working Group (SDWG) started debating at nine o clock. Unfortunately the delegates of the Saami Council and the Aleut International Association weren’t able to arrive to the conference and we had to debate without them. The issue we were discussing about was the growth of Arctic Shipping. During negotiations the delegates of the Arctic Athabaskan Council and the Inuit Circumpolar Council were the most active and they proposed loads of clauses. We managed to draft two resolutions that were going to be debated next day in the SAO meeting.

The day after the opening ceremony, all delegates went into their committee, and my committee was Arctic Monitoring and Assessment Programme (AMAP). We were debating “Meteorological Cooperation in the Arctic” topic. At first it was confusing, because we did the research about climate change and that wasn’t the right topic, but then we started to participate with the other delegates in order to solve the issue by making a resolution. I was the Russian Federation delegate and Russia is a rich country that does not want to give money to any indigenous people, that’s why I had to dabate quite a lot with the other delegates. Making this resolution we have achieve some solutions and we have learned a lot of new things.

After listening to some great speeches on Thursday night, and taking rest in a comfortable hotel, we finally started today our debate in CAFF about Whaling in Arctic Waters. The committee was formed by 13 delegates which represented different Arctic States. After arriving to the room where we were going to stay the whole day we started making a resolution in an open debate.

During the day we’ve met new people and we’ve learned how to work in groups, taking into account the opinion of everyone in the committee. At first I felt a bit dizzy, as all was very fast and professional, but as the day went on I started to feel more confident.
The delegates were very good at what they were doing, so the topic was quickly resolved in accordance to every member state of the Council. Once we had finished our job, we answered some questions in Kahoot which was perfect to take away the tension of the previous debate.

It has been a great day and I really enjoyed it, I hope tomorrow I feel more confident and I learn more than I have today.

Friday’s working groups ended around 5 p.m so we decided to go walking to the hotel without pressure. Once there, we decided to relax seeing some series and getting ready for dinner. We went to Zizzis, a italian restaurant where we ate some pizzas and pasta, we spend a really good time there and when we finished we went to the hotel to sleep ready for the next day.

On Saturday morning we arrived at 9am to Norwich School where we sat with our delegations to discuss the resolutions that we prepared in our committees yesterday. The main purpose of the meeting was to try to discuss the resolutions in order to prepare them for the Ministers’ meeting. After being discussing for a long time about the AMAP resolution we went for lunch where we ate with some English colleagues and exchanged many anecdotes. After lunch we proceeded to discuss the other two resolutions and came up with reliable amendments and solutions. At the end of the SAO meeting we had a quick talk with the director Dr. Speca who gave us tips to do well in Sunday’s Ministerial meeting.

After the conference we had two hours to relaxed and prepared for the black tie dinner, that started at 19:00. At 18:45 we were dressed with our best clothes and ready to go. We went walking to the Assembly House, where the dinner was celebrated, when we arrived, everyone was there, we were talking with the other delegates until the the dinner was served. The dinner was buffet so everyone went to take their food and after we sit down in different tables. At the middle of the dinner Dr Rose gave us a talk about debating and Climate change, that was very interesting. After that we had the dessert and we all took lemon tart and cream, and while we were eating it we play to a Quiz about the Arctic, we didn’t know most of the answers but it was really fun. Then by 21:15 the dinner finished and everyone went home, but we stayed playing music until 22:00 more or less because Dr Speca allowed as, after that we left the building and went back to the hotel to prepared the conference of tomorrow.

On Sunday, after having decided in the SAO meeting which resolutions were going to pass, the ministerial meeting started. During this event, all delegations started to debate intensively about each topic of the three committees: CAFF, AMAP and SDWG. Firstly, we argued on the topic of meteorological cooperation, been able to approve one resolution. After a break in order to rest and negotiate with other countries,we discussed whaling in Arctic waters followed by the growth of Arctic shipping. Around three o’clock, the conference’s, party’s and joke awards were distributed between the delegates, it was so funny!

On sunday, when we finished the ministerial meeting, we returned to the hotel. After this, at 5pm we went to St John the Baptist Cathedral, which is located in the city of Norwich, England. The inside was incredible. What most surprised us was its spaciousness and the beautiful songs that were sang. In fact, it is the second largest Roman Catholic cathedral in England.

Then, we had free time so we accorded to go to a restaurant, which is called “Five Guys”. There, each of us ordered a hamburger and as luck would have it, they gave us free french fries. We had a great time!

Finally, we went back to the hotel. We were exhausted but we had a wonderful experience and I would like to repeat it.

Today we had the option of having a lazy morning until 12, which was the time when we had to check out. At 13:00pm Josh was going to pick us up with the minibus so until then most of us went shopping, we wanted to make the most of our last hour in Norwich!

We got to Stansted by 3pm and we headed to security. When we were all sorted out we had a lot of time to have lunch, since our flight had a one hour delay. When the gate finally appeared in the screen we took our suitcases and approached the gate with our passports ready. We all took our places and by 8:15pm were all ready to take off. By 10:15pm spanish time the plane landed and NORMAC 2019 had officially ended. The idea of the trip having ended made us all really sad, as it all went really fast. The trip to Norwich had definitely been a good choice and we would definitely enjoy going again some time, hopefully soon!