A speech about giving speeches 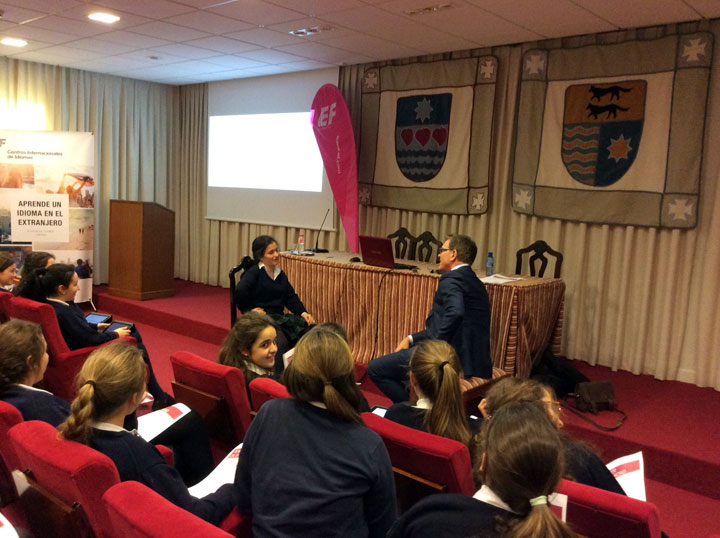 A few days ago, Mr John Dohrmann, a teacher from New York, came to our school to give us some advice of how to talk in public. Here is what he told us.

One of the most important things is planing the speech that is going to be given. It should start with an introduction of the the topic followed by an explanation that lasts more. But what is going to be said is not as essential as the body language, because it represents the 58% of what the audience remembers after a speech. The facial expression and the body position should be open, it has to invite the crowd to listen to the speech given.

Nervousness is the difficulty that must be overcome after or during the presentation. Mr Dohrmann told us that speaking with confidence and showing excitement can help us to, at least, give the appearance of not being nervous. “Nothing bad can ever happen”, he said, “No one has died because of giving a speech”. The worst thing that can happen is that the audience is not interested. In that case, getting through it as fast as posible is the best idea, only focusing in the main points. But there is another way to avoid this before even start the presentation. Practice. Practice, practice and more practice, as he kept saying. Practicing in front of the mirror, trying to do it to some friends or family. Even in front of a camera to what the things done wrong and to improve others.

Those points focus on the preparation, but Mr John told us that during the speaking or the speech that is going to be given, having fun is the most important thing. Knowing the topic so perfectly that improvising during it, is posible.

I believe that his speech was really helpful, as some of us are going to a MUN conference in two weeks time and the speaking part is one of the most important things. Actually, I am going to take his advice and see how it goes in The Hague MUN conference.